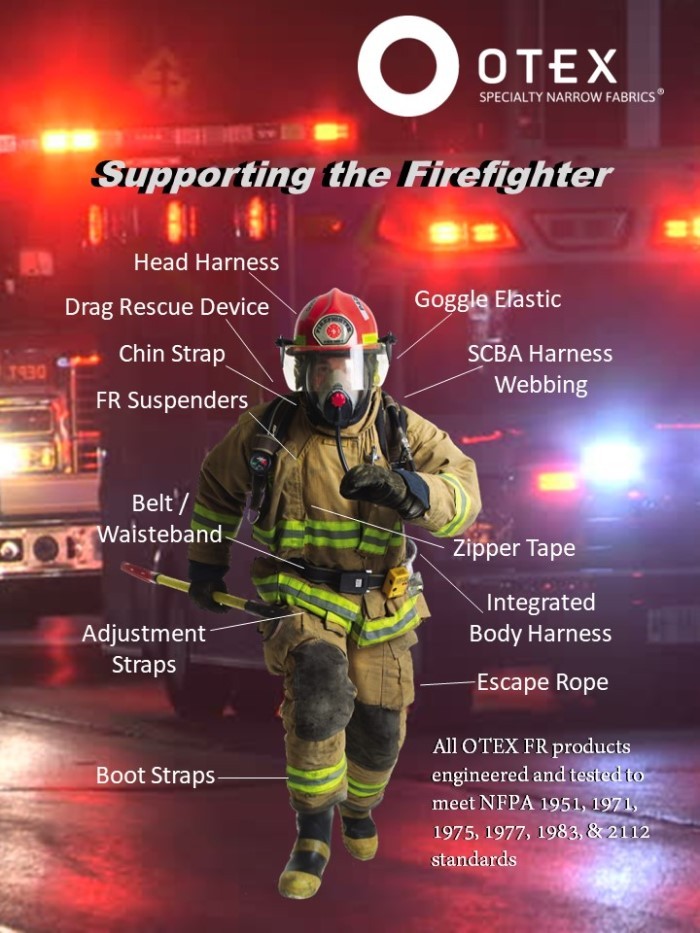 Needing to be prepared for any number of challenging and dangerous scenarios in their work, and often having to carry protective equipment and clothing to address those situations, it is obvious why so many lightweight and highly performing textile solutions are standard component choices.

Personal Protective Equipment (PPE) which consists of fire resistant (FR) clothing, gloves, boots, helmets, breathing apparatus and a Personal Alert Safety System (PASS), or Clothing – commonly referred to as Bunker, or Turnout Gear – has changed much over the years.   In the early days – when firefighting techniques rarely called for firemen to enter a building (extinguishing was targeted from outside the burning structure) – the main performance criteria were keeping warn and dry.

History of Protective Gear for the Firefighter

The first protective gear worn by those early firefighters was made primarily out of wool, leather and/or rubber, and provided some measure of protection against heat, cold, and moisture; although not from flames.

The first helmets were made from leather and an American named Jacobus Turck has been credited with designing and producing the original design in 1740. The ‘modern’ variation is attributed to Henry Gratacap, who developed his version sometime between 1821 and 1836. The dome-shaped helmet had a front shield and reinforced design. Other variations existed, such as the “Merryweather” worn by British firefighters during the Victorian era. This helmet was introduced in 1868, and effectively replaced the earlier leather helmets.

In the second half of the 20th century, great strides were made in the evolution of PPE and Turnout Gear materials.  Standards for performance testing were developed and what became the National Fire Protection Association (NFPA) was pivotal in creating universally recognized methods and definitions. The committee developed a firefighting jacket with three layers that consisted of a fire-resistant outer layer, a water-resistant barrier in the middle, and an inner layer to protect against heat transfer.

Advent of the Self-Contained Breathing Apparatus

Respiratory protection for firefighters was also minimal in the early years. Examples of firemen growing beards, soaking them in water, biting the beards, and breathing through them as defense in a smoke-filled environment have been noted.

Italian scientist Giovanni Aldini attempted to design a mask in 1825, in order to provide heat protection and fresh air. This led to design improvements and eventually, helmets with a hose attached to a pump that supplied fresh air were introduced

The first self-contained breathing apparatus (SCBA) was introduced in 1863.  Inventor James Braidwood put two canvas bags together lined with rubber.  The airtight sac was worn on the firefighter’s back and secured with shoulder straps and a waist belt. Two rubber hoses connected to a mouthpiece, enabling the wearer to inhale fresh air. The sacs were filled with air by a set of bellows and sealed with corks until needed. Firefighters also wore goggles, a leather hood, a nose clamp, and a whistle.  Introduction of the SCBA transformed firefighting forever.  With the improvements in protective turnout gear and other PPE, entering burning structures was now possible – allowing for the rescue of trapped individuals, while mitigating threats to the safety of the wearer.

Throughout nearly all the iterations and improvements to firefighting PPE, PASS, and Turnout/Bunker Gear, textiles components have played a crucial role.  In order to meet the demanding performance needs of said components, new fiber materials, coatings, and manufacturing techniques were – and continue to be – explored.

Today, PPE is inclusive of a wide variety of different gear, including triple-layer clothing, breathing apparatus, PASS devices and modern communication equipment.  There are a host of standards created by NFPA and other certifying bodies to ensure the continuity and quality of many performance criteria related to this equipment, including:

Relative to the fabric components, a host of materials have been developed to meet the aforementioned standards; well-known material fibers  include:

New fibers, and fiber combinations, are always being explored, to enhance and expand upon the known capabilities of specialty textiles for the firefighter’s toolbox

Of particular importance to the firefighting industry – due specifically to their versatility and heightened performance – is the category of Specialty Narrow Fabrics.  These include the following

While held to the same performance standards broad fabrics in terms of environmental challenges, this group of textiles offers heightened performance and construction options either not available in broad fabrics, or requiring cut-&sew modifications that would be costly and difficult.  Advantages of specialty Narrow Fabrics include:

In fact, it is difficult to find any key portion of a firefighter’s Turnout Gear that does not incorporate some type of Specialty Narrow Fabric.  Common applications include:

Additionally, many advances in firefighter textiles have led to important performance benefits for other sectors, such as defense, utility/electrical (arc-flash safety), welding/forging, mining, fall-protection, aerospace, and others.

OTEX Specialty Narrow fabrics is not only a leading manufacturer of all forms of performance narrow textiles for the 21st century firefighter – and related – industries (including e-textiles and smart fabrics), we are also the original inventors of many key components protecting the brave men and women who put themselves in harms way every day to protect others.

If you would like to learn more about our extensive line  of innovative Specialty Narrow Fabrics, of have a unique design request, give us a call.  The OTEX Research & Development and Quality Assurance teams are experts in fiber selection and textile design/testing.  They will be thrilled to help you determine what will be the best performance textile for your specific needs.  Give us a call!

OR FILL OUT THE FORM BELOW:​